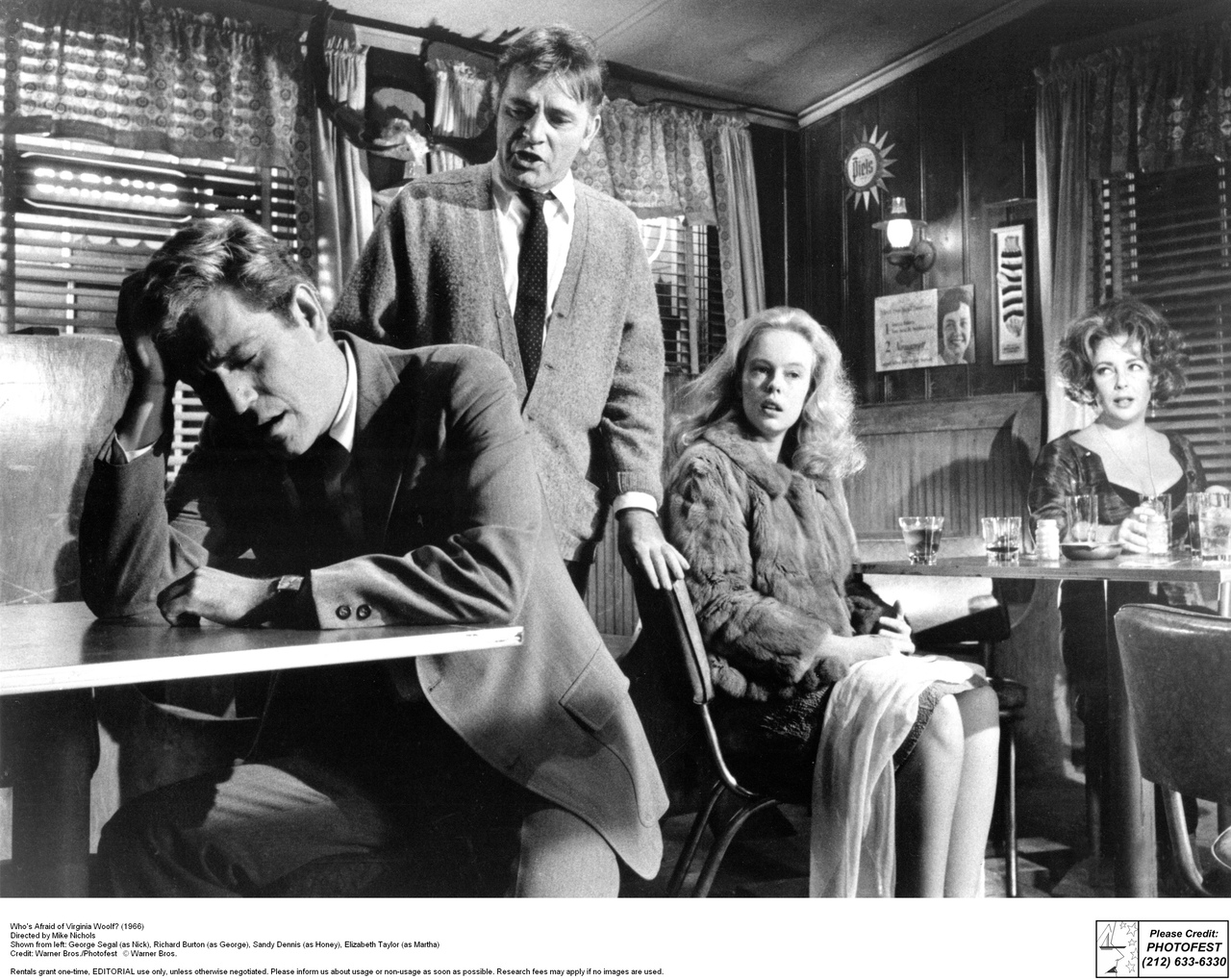 The roadhouse scene from "Who's Afraid of Virginia Woolf?" with George Segal, Richard Burton, Sandy Dennis and Elizabeth Taylor.

Tuesday, September 27, is pub. day for "Ernest Lehman: The Sweet Smell of Success." I've worked on it for seven years and am glad to see it launched. Now we'll see what the critics and the public think. Please feel free to leave a few words of encouragement if you're so inclined.

Thanks, Kirk. Look forward to seeing you back in November.

Congratulations! Can't wait to get my very own copy! Look forward to reading the book again. I can't stop talking about it to friends!!

Thanks, Lisa, and thanks for your generous blurb! I hope to see you at a signing (not set up yet).

Congratulations—I can’t wait to read it!

Thanks, Steve. I'll cross my fingers and hope you like it.

Congratulations. Looking forward to reading it

Happy pub day, Jon!! I can't wait to get my hands on a copy and read this book...Ernest Lehman was such a talent, and his writing, humor, and dedication have influenced me. His films have made me smile and think. I am so glad you worked hard to get his story out there.

Thank you, Bill, Ken and Caren! Your support is very much appreciated.

As his youngest son...that is up until I was usurped by my half-brother, 48 years my junior... I knew Ernie Lehman as intimately as anyone could, and I can only marvel at the breadth, depth, and incisiveness of Jon Krampner's biography of my father. In a nutshell, he's nailed my Dad: his savvy, sweet-smelling success as a screenwriter; his flaws and foibles as a father; and his lifelong, Peter-Pan embrace of the Eternal Mother: from his own mother, to his Fraulein, to my mother, to his round-the-clock housekeepers, and, ultimately, to my step-mother, 15 years my junior.

Alan, I very much appreciate your kind words. You were a crucial and indispensable part of the book, and I'm grateful for your gracious and insightful responses to my questions, as well as the documents, photos (you contributed fully one fourth of the photos used in the book) and leads you provided. Thank you so much, and I hope you've fully recuperated from the US Open..

Jon: Bravo! You've done it again! You're a marvel and an inspiraton.

Thank you so much, Tom. But you're no slouch in the publication department either!

Jon, just got the book in the mail. Can't wait to read it! I know how hard you worked on it. The testimonials on the back are amazingly impressive. Congratulations. I'm so proud of you, old friend!

Congrats, Jon!!! Very happy for you. I look forward to reading your latest.

Thanks, Gail! You guys got me started on this path back at Emmy Magazine.

Hi Jon, Are you planning any readings and signings in the mid-Hudson Valley region? The Elwell family house is the second one on the south side from the intersection where the one and only stop light is located. There are still a few bars on Main St. but to my dismay it's not very funky around here any more and the majority of shops are lifestyle businesses.

First of all, thank you so much for indexing my peanut butter book -- I'm sorry that we didn't get to work together on this one.

I'm probably just going to do a few appearances here in the Los Angeles area, and given the persistence of Covid, I'm not sure how wise that is. But if I'm ever in your neighborhood, I'll be sure to drop in!

I've just finished reviewing the page proofs of the Lehman biography. Although it's six months until pub date, the only thing left to do (other than reviewing the index) is preparing to tell the world that this book is the greatest thing since sliced bread.

In communing with the page proofs, I learned from David Cobb, the production supervisor at the University Press of Kentucky, that the body type for the book is Minion Pro, and the display type for chapter headers is Mostra Nuova.

According to Wikipedia, Minion is a serif typeface (serifs are little lines attached to typeset letters; most people don't even notice them, but they make letters more readable). It was designed by Robert Slimbach and released in 1990 by Adobe Systems, the people who gave us Adobe Acrobat. While recent, it's inspired by late Renaissance-era type and intended for body text and extended reading. Minion Pro is an update released in 2000.

The Mostra Nuova used for the chapter headers is an updated version of lettering used in Italian Art Deco posters and advertising of the 1930's. It was created in 2009 by Mark Simonson. It sounds like "Bossa Nova," which reminds me of Eydie Gorme's early 1960's hit "Blame It On the Bossa Nova."

Upon first glance, Mostra Nuova looks a little theatrical for my taste, but this is a book about show business, and I'll probably acclimate to it.

This will probably be the last blog post until late summer, as I can't imagine any reason to bug you before then. Take good care of yourselves in this increasingly dystopian world and I'll catch up with you later.

Thanks. Really looking forward to your new book.

It Pays To Advertise

After six years of hard labor in the salt mines of contemporary American non-fiction, this is the year I will spring my biography of Ernest Lehman -- my fourth book -- upon the public. It will be published by the University Press of Kentucky, which, despite what I believe is the relatively attenuated state of the film industry in Kentucky, has a very strong line in film books.

Publication date (or the "pub date," as publishing industry insiders say) is September 27, 2022. But there's no harm in starting to get the word out now and letting the world know what's coming down the pike. According to the poem "It Pays To Adverise":

The codfish lays ten thousand eggs,
The homely hen lays one.
The codfish never cackles
To tell you what she's done.
And so we scorn the codfish,
While the humble hen we prize,
Which only goes to show you
That it pays to advertise.

Although I've never much thought of myself as an adman, this website will promote the book and try to build a community around it. Feel free to say hi and send your (hopefully) good wishes.

Thanks, Flo! Welcome aboard.

Good website. I hadn't known about Lehman and the large role he played in so many of the Hollywood films I have enjoyed. I look forward to the book.

Thanks, Doug. And I'll continue to work on getting you to join the ranks of writers.

Really looking forward to your book, Jon! He wrote a lot of my favorite films!

Congrats, Jon. I look forward to reading it.

It’s very exciting Jon. I wish you the very best and appreciate being kept in the loop. Always, Iris

the poem sounds a lot like Ogden Nash. Congrats and good luck with the book. advicesisters.com would love to review it! 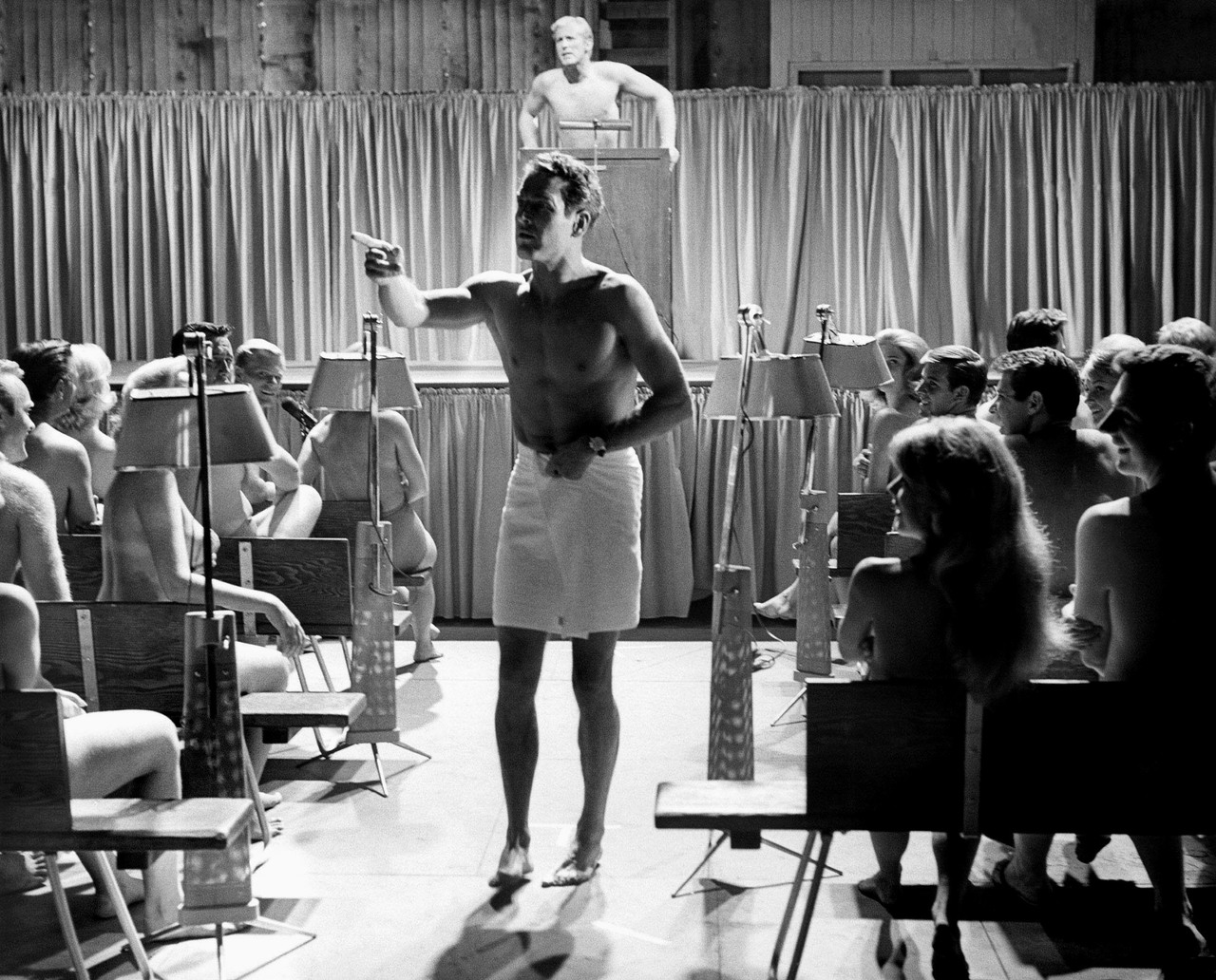 Paul Newman in the nudist colony scene from "The Prize," one of Lehman's lesser films.
Loading…}