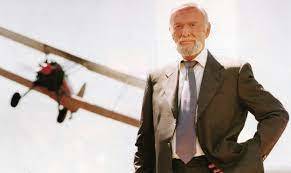 Ernest Lehman, buzzed by a cropduster for a late-life profile in Vanity Fair. (Art Streiber photo)

Cary Grant buzzed by the crop duster in "North By Northwest"

Cary Grant runs from a murderous crop dusting plane in North By Northwest. Julie Andrews twirls and warbles across an alpine meadow in The Sound of Music. In a smoke-filled, booze-soaked Broadway nightclub, megalomaniacal columnist J.J. Hunsecker (Burt Lancaster) and sycophantic, ambitious publicist Sidney Falco (Tony Curtis) warily circle each other in Sweet Smell of Success. The Sharks and their girls dance the memorable, sexually-charged "America" on a Manhattan rooftop in West Side Story. Richard Burton and Elizabeth Taylor share a light moment in their bedroom before going downstairs to gut Sandy Dennis and George Segal – and each other – in Who's Afraid of Virginia Woolf?

As varied as these iconic scenes are, they have one thing in common: all were written for the screen by Ernest Lehman. Vanity Fair called him "perhaps the greatest screenwriter in history." William Goldman, another candidate for that title, said "the three greatest screenwriters are Bergman, Wilder and Lehman." Even The New Yorker, never his greatest fan, finally conceded "he may be the most successful screenwriter who ever lived."

Among his other important films, Lehman (along with Billy Wilder) adapted Sabrina, with Humphrey Bogart, Audrey Hepburn and William Holden; Somebody Up There Likes Me, which made Paul Newman a star; The King And I; and Alfred Hitchcock's last film, Family Plot. Because his is a career of superlatives, he's also responsible – as producer, director and writer -- for one of the worst films in modern Hollywood history, Portnoy's Complaint.

Who was the man behind these landmark films? An always articulate, sometimes persnickety screenwriter from Manhattan's Upper West Side and the Five Towns of Long Island, devoted to his wife (but not his children), ham radio, sports fandom, France and hypochondria, who created his iconic scripts in late-night sessions fueled by tequila and grilled-cheese sandwiches.

This thoroughly researched biography, the first of Lehman, takes readers into his writing room and pre-production meetings and onto the sound stages and locations of his films. It provides candid looks at his two marriages – the first lasting more than 50 years, the second to a woman more than 50 years his junior – along with his unvarnished opinions of cultural movers and shakers like Edward Albee, Mike Nichols, Oliver Stone and Alfred Hitchcock. It paints as insightful a portrait of this brilliant screenwriter as we're likely to get.

As a discerning member of the literary public, you can order the book

Ernest Lehman was born on December 8, 1915. On that day, the World War I-themed villanelle "In Flanders Fields" was published in England's Punch Magazine