Here's my interview with Daniel Moran of "New Books in Film," a podcast channel of the New Books Network. It runs for 57 minutes.

The Spy Command is a blog run by managing editor Bill Koenig. It's about James Bond and other spies. He conducted this interview with me about "North By Northwest" and "The Prize," Ernest Lehman's two espionage-themed films.

Being something of a Renaissance Man, Ira is interested in everything, including the world of film in general and Ernest Lehman in particular. Here's my 27-minute interview with him on his "Everything Bagel" podcast.

Jan Wahl, based in the San Francisco Bay Area, has a syndicated radio broadcast on entertainment. Here's my 12-minute interview with her and co-host Rick Tittle.

Stephen Vagg of Film Ink, an Australian film publication, did an interview with me. This is a written series of questions and answers, not an audo.

This is an interview with me conducted by Steve Cuden, the producer of Storybeat, a podcast about the creative process. It runs for an hour.

Why didn't Billy Wilder like Lehman? How did Minnesota students protest "The Sound of Music"? Which of Lehman's films was he fired from? Take this quiz and find out!

1) Lehman grew up in which town on Long Island?

2) When Lehman met his first wife, the former Jacqueline ("Jackie") Shapiro, in New York about 1940, she was working at the perfume counter at Saks Fifth Avenue. How long were they married?

3) Before moving to Hollywood in 1952, Lehman worked for which influential Broadway figure?

4) On "Sabrina," why didn't Billy Wilder get along with Lehman?

5) "The King And I" is based on the story of English schoolteacher Anna Leonowens, who was a distant relative of Boris Karloff. But Leonowens would have nothing to do with Karloff's branch of the family. Why not?

A) Because she thought show-business people were morally dubious
B) Because a member of Karloff's branch of the family made a mixed-race marriage
C) Because most members of that branch of the family were in the U.S. and Leonowens disapproved of the American Revolution
D) Because they looked down on her for going to work for an Asian ruler

6) "Somebody Up There Likes Me" is the story of which professional boxer?

7) How many Paul Newman films did Lehman adapt (bonus points if you can name it/them)?

8) What was Newman's nickname for Lehman?

9) In "West Side Story," which changes did Lehman make to the "I Like To Be In America" sequence?

A) He moved when it appears in the story.
B) He moved where it appears, from an alleyway to a rooftop
C) He had Stephen Sondheim rework the lyrics
D) All of the above

10) Lehman adapted "The Prize," written by his friend Irving Wallace, about the drama behind the scenes of the Nobel Prizes, as a knock-off of which of his best films?

11) What was Christopher Plummer's disparaging nickname for "The Sound of Music"?

12) In 1966, college students in Moorhead, Minnesota, took what action to protest "The Sound of Music" having run in the town's only movie theater for more than a year?

A) They made a life-sized statue of Julie Andrews composed of cookies, candy bars, hard candies, treacle, and doughnuts to satirize the film's excessive sweetness
B) They picketed the theater
C) They engaged in civil disobedience, chaining themselves to the box office
D) They bombed the theater, an event later known as the Moorhead Massacre

13) Despite all of their differences, "The Sound of Music" and "Who's Afraid of Virginia Woolf?" have all of the following in common except for which?

A) Lehman was nominated for best adapted screenplay
B) Both had location shoots plagued by rain delays
C) On their location shoots, local dairy farmers complained that filming harmed the milk productivity of their cows
D) Both went over budget

14) During the filming of "Who's Afraid of Virginia Woolf?" Elizabeth Taylor suffered from which health problem?

A) Her nephew accidentally shot her in the eye with a toy rocket
B) She broke a crown on one of her teeth.
C) She suffered from an intestinal disorder
D) All of the above

15) Which two actresses did Philip Roth suggest for the role of Mary Jane Reid, AKA "The Monkey," Alexander Portnoy's shikse sex goddess in "Portnoy's Complaint"?

16) Which was the only one of Lehman's films he was fired from?

17) Lehman's second wife, the former Laurie Sherman, was younger than he. How much younger?

18) Which of his films did Lehman say was his favorite?

19) Who was Lehman's favorite director?

20) Lehman was nominated for six competitive Oscars, four for best screenplay and two as producer of the best-picture nominee. How many did he win?

Although he was born on Manhattan's Upper West Side, Lehman was raised in Woodmere, one of Long Island's Five Towns.

Lehman was a legman and assistant to the colorful Hoffman, who allowed him to use his column in The Hollywood Reporter to write the self-promotional piece that led Paramount to hire him as a contract writer.

Regarding Lehman's Yankee fandom, Wilder called him a classic underdog who roots for the overdog.

5) B: Because a member of Karloff's branch of the family made a mixed-race marriage

The song "Getting To Know You" is about how enchanted Leonowens was to meet her Thai pupils. But in real life, she wouldn't want anyone to think she might be related to them.

The film is based on the memoir of the same title, which Graziano co-authored with journalist Rowland Barber. Graziano was world middleweight champion in 1947-48.

8) A: The Razor-Blade Personality of Hollywood

When Newman complained he was having trouble with some of Lehman's dialogue on "From The Terrace," Lehman came down to the set, easily read the dialogue and told Newman that if he could read it, he didn't see why Newman couldn't as well.

Sondheim insisted that he wrote the lyrics that appear in the film for the Broadway version, but the documentary record does not bear him out on this.

Plummer, trained as a Shakespearean actor, later made his peace with the film, saying that at least it didn't have any violence or car chases.

12) B: They picketed the theater 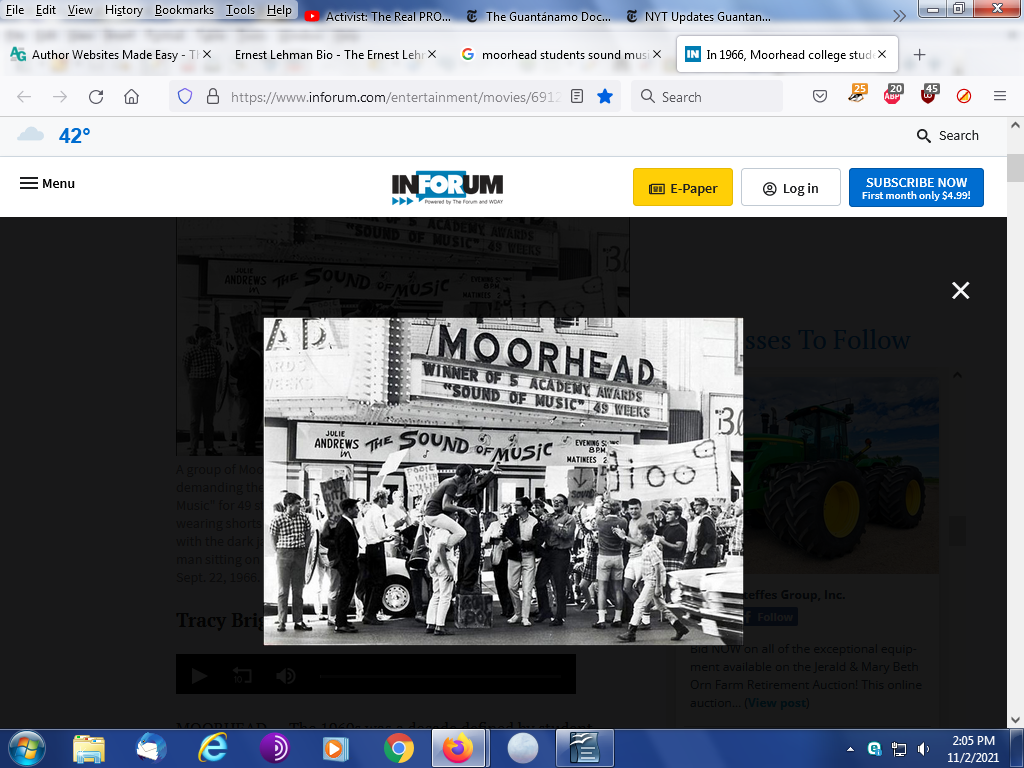 On September 22, 1966, students at what was then called Moorhead State College picket the town's only movie theater, which had been showing "The Sound of Music" for more than a year.

13) A: Lehman was nominated for best screenplay

Being a movie star is not always as easy as it looks. The lady was a real trouper.

15) B: Paula Prentiss and Faye Dunaway

In a letter to his agent Robert Lantz, Roth said "Paula Prentiss. Precisely the quality of craziness and voluptuosity and torment and need. If you want to go in an entirely other direction, Faye Dunaway." To his enduring regret, Richard Benjamin, Prentiss's husband, starred as Alexander Portnoy.

Both producer Robert Evans and director John Frankenheimer owed Lehman favors, Evans because he had asked Lehman to talk him up with Barry Diller in order to improve his pay package as the film's producer and Frankenheimer because Lehman's "The Comedian," which aired on television's "Playhouse 90," was his career break and because Lehman provided him with notes for "Seven Days in May". But Hollywood is a cold and ungrateful place.

While it hasn't achieved the iconic status of some of Lehman's other films, he said on several occasions that it was his favorite.

Lehman made four films with Wise: "Executive Suite," "Somebody Up There Likes Me," "West Side Story" and "The Sound of Music." In 1986, they were going to collaborate on a musical version of "Zorba the Greek," but financing for the project fell apart. "My scripts were shot by Bob very much as they were written," Lehman said, "even including the camera angles. So I was very careful if it was a Bob Wise picture to make sure it's right."

In 2001, Lehman did receive an honorary Oscar for the body of his work, making him the first screenwriter so honored. But preceding that, his record at the Oscars was one of uninterrupted futility, with some of his losses causing film fans to scratch their heads in befuddlement.

Lehman's adaptation of "West Side Story" lost to "Judgment and Nuremberg" (Abby Mann). Lehman lost twice on "Who's Afraid of Virginia Woolf?" both times to "A Man For All Seasons." As producer of the best-film nominee, he lost to Fred Zinnemann; as screenwriter, he lost to Robert Bolt. The last time Lehman was nominated for an Oscar, it was as the producer of best-picture nominee "Hello, Dolly!" which lost to more-in-tune-with-the-zeitgeist "Midnight Cowboy."

Prominent film critic Leonard Maltin says "This highly readable biography of one of Hollywood's most successful screenwriters is as welcome as it is overdue" and that "it makes for good reading." (It's the second review down in his film-book roundup.) He also describes me as "a bit of a character." Well, we all have our eccentricities.

Shelf Awareness calls it "the juiciest Hollywood biography of the year," adding "it's so delectable, it's impossible to put down." For good measure, it says that it's "a superbly written, flat-out boffo Hollywood tell-all." Thank you so much, Shelf Awareness!

I'm unable to conjure up a link to the Library Journal review of the Lehman bio. But in it, Frederick Augustyn Jr. says "Movie mavens and amateurs will appreciate this crisp, often jocular book...With the marginalization of screenwriters in stories about the entertainment industry, this life history fills a chasm in the literature."

Tom, who served as my mentor on this book, is kind enough to call it a great book. Scroll down to the sub-head "Hasn't This Been A Great Year for Screenwriting Books?"

In The New York Journal of Books, novelist Tom Strelich says, "The scholarship here is astounding, and the reader leaves the book not only with an abundance of dog-eared pages, but also an appreciation of both the biographer's subject (i.e., Lehman) and the biographer's art."

Bill Koenig, managing editor of The Spy Command blog, calls the book "Grade A" in this audio review. Thanks, Bill!

The Hometowns to Hollywood Blog says "Jon Krampner's biography of Ernest Lehman is well-researched and sure to engage classic film fans."

The Advice Sisters blog is run by influencer Alison Blackman, who just happens to be my first cousin. She calls the book "very detailed and well-researched." Thanks, Alison!

Vienna's Classic Hollywood says the book "gives an excellent overview of Ernest Lehman's career." It also says there are too many chapter notes, but I like to give my sources.

Alden Graves is a bookseller and the movie and music buyer at the Manchester, VT, branch of the Northshire Bookstore. He calls the book "impeccably researched" :)